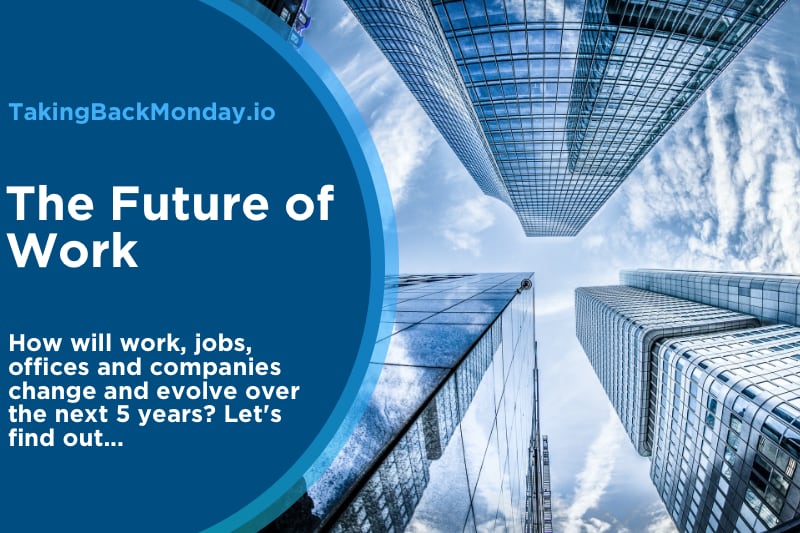 “Future of work” predicts the effect of technology, the environment and geopolitics on the future workplace. The COVID pandemic highlights how quickly our current working methods can change. Long term trends in technology, such as collaboration software and video conferencing, will have a significant effect on where people will work and the skills they require.

It’s difficult to make predictions, especially ones about the future

As (most) people know, to predict the future is impossible. However, that doesn’t stop a lot of people, including me, prepared to humiliate themselves trying to guess how the workplace will change over the next 10 years. In this article I will explore ideas from a multitude of sources.

This outline of workplace trends predicts how work will change over the next 10 to 20 years. These predictions enable companies and people to manage the transition from their current work practises and learn the necessary new skills.

The Future of the Workplace

Most “Future of Work” thought leaders agree on the points above. An additional area to consider is the type of company that could emerge.

These companies are immersed in technology and innovation. They’re lean, versatile and promise huge opportunities to attract the world’s best talent. Entrepreneurs can quickly grow a company using remote workers with few restrictions due, in part, to the distributed nature of the company. However, loyalty towards the company is low as the best Talent only remains while there is significant potential for future rewards. Employee protection is also minimal due to the rapidly shifting framework.

These companies use their size and influence to achieve significant growth. They do this by offering the best talent with the biggest rewards. They put huge investment into their core team to implement automation, robotics, big data and social psychographics. This places them ahead of the competition and makes it difficult for new entrants. However, outside of the core team the workplace is lean, low skilled and constantly measured to ensure they work at maximum productivity.

Driven by both their employees and customers to adopt green principles. They have a strong social conscious and environmental responsibility. Green companies recognise that financial motive is not the sole benchmark of success, meaning they incorporate well-being, social responsibility, diversity and human rights into their corporate goals. Workers are expected to reflect the same morals meaning travel is limited and remote working encouraged.

Using technology workers find other people who share their passions. They work on projects together, driven by shared principles and enthusiasm. They’re loyal to the company’s mission so prepared to stay with the organisation for longer and may accept being paid less in order to see the goals achieved. Work is fluid and geared around the worker. However, this ‘People First’ philosophy also makes the company vulnerable to competitors prepared to use automation.

The type of company that will emerge is dependent on a number of factors. What isn’t in doubt,  however,  is the role technology will play in the development.  In nearly all scenarios people and companies adopt emerging technology to drive growth,  lower costs, and enter new markets.

The skills required by workers in future vary greatly. It would be easy to say “Anything a robot can’t do”. Perhaps this would benefit people in, say, the arts. However, computers have now ‘created’ music, stories, films and pictures, so who knows?

The acronym STEM is often used to describe the future of work skills. It stands for Science, Technology, Engineering and Maths. These four skills will play a significant role in technology such as AI, robotics, analytics and automation. Many countries are investing in education and training to increase their skills in these subjects. However, Universities still tend to teach in narrow specialisms rather than providing more general courses.

As people become more distanced from each other geographically, companies will employ people who specialise in areas such as keeping workers motivated, communications, well-being and measurement.

I never make predictions and I never will

Companies can not predict the future. However, these future of work strategies will help companies prepare.

1. Be prepared for a big change in the future of work

Although change is a gradual process you might find the slope quickly steepens. Be prepared for more than just a small step away from where you are today (PWC)

Although governments may be moving slowly in this area, a significant and growing number of people want to work for companies with a social conscience. This will likely tilt many companies to adopt green policies before governments or even consumers demand it. Remote working is seen by many as the green alternative to long commutes

The change in the workplace will be dramatic over the next 10 years. This will partly be driven by companies who want to reduce costs while maintaining strong productivity. However, it will also be driven by the workers themselves who want a better life balance or compare themselves to other remote workers, e.g. enduring a long commute vs someone who doesn’t.

‘Working from home’ is different from ‘Remote Working’ (see my article, “The meaning of Remote Work“). The former describes the majority of companies whose response to COVID was to tell staff to work from home during the pandemic. Many people were poorly prepared and had to figure out the mechanics of software like Zoom for themselves. Remote working is different in that it’s an ideology of senior management. This not only promotes people working from home but is a central part of the culture. There are an increasing number of tech companies who don’t have an office at all, for example, Todoist and Buffer

Currently most offices are a mixture of places to gather, work, socialise, plan, gossip, meet and learn. The fact most of this takes place in the same location means people haven’t previously questioned each of these roles. It’s simply been taken for granted. However, as work becomes remote, offices become distributed, automation increases and people become more isolated, each of these distinct roles will need to be assessed and catered for.

It’s perhaps not a surprise that technology companies tend to be leading the way in embracing remote working. The nature of technology is, in part, to disrupt current processes. Therefore, the leaders tend to adopt a similar approach to company structure. In addition, many technology start-ups eschew the overhead of having an office by working from home. As they grow, new recruits take it for granted that working from home is the accepted mode of working.

Other market sectors that will change rapidly include:

Despite the significant security concerns these companies will be motivated to embrace remote working for several reasons. Firstly, they tend to incur high office costs. Secondly, they will be attracted by the ability to recruit people from a global talent pool. Thirdly, a large majority of work revolves around documents and meetings, rather than requiring people to be physically in an office.

Such as record labels, music publishers and distributors. I included this due to my own experience working in this industry. Much of the work is office based, often with a youthful, tech-savvy workforce. This means they’re prime for remote working as people want to spend less time in an office. The challenge is these companies tend to be highly sociable, which will need to be replicated virtually.

While many companies need their works in a physical environment the same is often not true for their headquarters. Roles in finance, marketing, legal, HR and sales will likely be more remote in future.

I'd love to hear your comments or suggestions for future articles.

If you work in SEO, a quick word to save your time and mine: I know how Black Hat SEO works, i.e. posting non-relevant comments and links on message boards. If you attempt to spam the Comments I won't hesitate in banning your IP. Just saying.